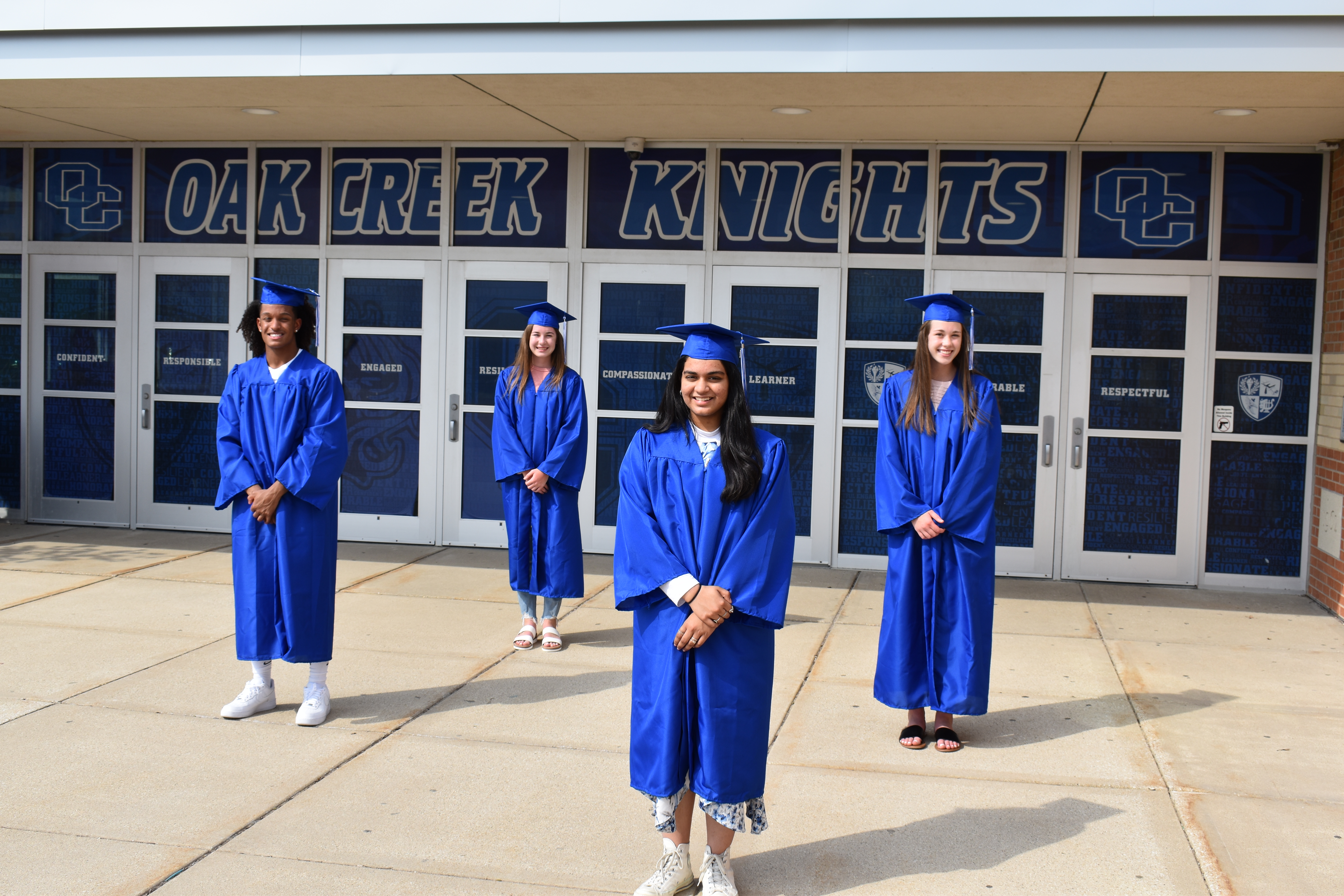 It should have been a year of lasts.

Instead, the Class of 2021 has experienced a year of firsts.

Craesean Slaton, Sophia Azim and Ashley and Grace Hanel are all seniors at Oak Creek High School. Set to graduate in June, these four students sat down to tell the story of their high school careers. One that has been plagued by a global pandemic, but they won’t let that define their experience.

Craesean Slaton missed the crowd noise the most. The Oak Creek football player finished the season his junior year already excited for next year.

“The stands were always full and I remember thinking that my senior year, seeing those faces in the crowd, would be one of the best feelings ever.”

But, in March 2020, COVID-19 changed all of that. Schools were shut down, sports were canceled – life as we knew it was changed.

“At first we were all happy that we would have two weeks off of school,” Slaton recalled of those first few days last March. “No one had any idea we’d be gone for the remainder of the school year. But, after a few weeks, it just clicked. Like wow, I am really not going to be able to finish my junior year. It ended so abruptly and quickly. I was sad.”

Sophia Azim had a similar story.

“It wasn’t until those two weeks were up that things started to get serious,” Azim said. “The news covered it more. Everyone was saying we should wear masks. And we still weren’t back at school.”

Her once busy life filled with school work, extra-curriculars and band practice had come to a screeching halt.

“I would actually call my friends, like on the phone,” she said. “It might sound silly but I never would have done that before. I just needed to hear their voices.”

Ashley and Grace Hanel found that finding different ways to connect with their family and friends was key.

“We would FaceTime, group chat and when the weather got nicer spend time outside,” the twin sisters said.

In addition, they both also had full-time jobs – Ashley working at a local grocery store.

“It was crazy,” Ashley said. “They switched most everyone to a night crew because the stock that was coming in was too big to put out during the day. So, during the day we would organize the shelves so the night crew could quickly stack the new product. If we got paper goods in we put them out on the floor right away and they were gone within the hour.”

That spring the then high school juniors watched upperclassmen miss out on special events. “That won’t happen to us,” they thought.

But, this fall, things were still up in the air. And for Azim, it was a test of her character.

“This fall I struggled to stay on task. I was not doing well. So, I had to regroup and structure a new way of learning.”

Needing some stability, Azim stayed virtual until January 2021 when OCFSD welcomed back all students, face-to-face five days a week. With safety measures in place and masks on, students got to walk the halls altogether for the first time in almost a year.

“We are all doing what we can to make it as normal as possible,” Azim said. “Sure, it looks different and feels different but we’re thankful we’re able to be here in person safely and have these last several months together.”

And determined to make the most of their senior year, regardless of current events, the group has re-evaluated what is truly important.

“We were able to have a football season,” Slaton said. “Our coaches came up with a plan so we could still play. Even though there were no fans, we were able to play together one last time and that means everything. It was closure to memories we had with all the guys we’ve been playing and competing with for four years.”

“I didn’t go to a lot of events and do the normal high school thing my first three years. I was planning on doing all those things my senior year,” Azim explained. “So now I am trying to be part of as much as I can to get as close to those missed opportunities as I can.”

“I am more motivated,” Grace said. “Just by seeing people – it’s crazy how much that now means. We try to live in the moment, try new things and adapt to change.”

This fall, each of these four seniors has big plans. Creasean is off to the University of Minnesota- Duluth to play football and major in business. Sophia is still weighing her post-secondary options but is excited for what the future holds. Ashley and Grace are headed to pursue their passions – Ashley to Cedarville University in Ohio to study marketing and Grace to the University of Sioux Fall to study business administration.

Each member of the Class of 2021 has their own story to tell. And a lot of that story does revolve around COVID-19 and the events that followed. So, you might wonder why we started this story saying this global pandemic does not define their high school career.